The History of Fighting for Equity in Greater Park Hill

As documented in Park Hill Neighborhood History (from the Denver Library), our neighborhood has a long and storied history of standing up for injustice and fighting for the rights of all its residents. In 1887, Baron Allois Gullaume Engine von Winckler designed the original neighborhood on 32 acres of land he owned before he took his own life in 1898 and the property became available to other developers. This history describes the diversity of settlers attracted to the community from England, Denmark, Germany, the Netherlands and Italy as well as African Americans; the historic homes, some with their own ghost stories; and the many fights waged by community activists seeking to retain their quality of life and diverse heritage.

Below is an excerpt as it relates specifically to the neighborhood’s legacy of social activism. 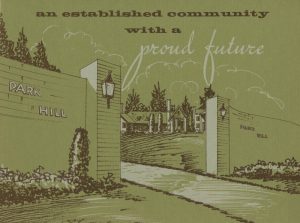 From the early 1920s, Park Hill was an established neighborhood, one frequently characterized as amongst Denver’s most desirable places to live. Developers presented the neighborhood not merely as a place to call home, but a reﬂection of accomplishment and afﬂuence, and they appealed to the aspirations of prospective homeowners. Similar appeals continued throughout much of the twentieth century. A brochure published in the 1960s to promote the neighborhood captured the appeal: ‘In Park Hill you can be pardoned for feeling quietly pleased with yourself… just a bit smug.’ Park Hill developers also took steps to assure prospective residents that their community would suffer no future decline or the encroachment of whatever, or whomever, they might deem undesirable. Like other Denver neighborhoods, including Montclair, South Denver, Highlands, and Berkeley, Park Hill developers established restrictive covenants and limited the use and nature of residential neighborhoods and homes. To the west, Jacob W. Downing’s “Downington” included racial restrictions, and by the early twentieth century, Downing Street marked a racial divide between black and white in Denver.

In the years immediately after World War II, Denver’s population growth and the increased demand for housing created the basis for the conﬂict central to Park Hill’s contemporary identity. Middle class African Americans, many from the Five Points neighborhood, began to purchase homes to the east, moving closer to the almost exclusively white Park Hill neighborhood. Within a few years, black families seeking the same quality of life as their white neighbors were poised to move into Park Hill. Unscrupulous realtors used the racial divide to their advantage, steering black families onto streets where their arrival precipitated white ﬂight. The practice, known as blockbusting, provided realtors with a ﬂurry of sales. Race also stood between prospective black homeowners and a Park Hill home, as they faced banks unwilling to lend and realtors unwilling to sell on particular streets.

Some Park Hill residents organized to seek an orderly integration of their neighborhood. In 1960, a coalition of Park Hill churches, their congregants, and other neighborhood residents met at the Montview Presbyterian Church. Together, they established the Park Hill Action Committee, later to become the Greater Park Hill Community, Incorporated, which would become almost synonymous with the neighborhood and its civic efforts. Leah Dillard, whose family purchased a home on Ash Street, found some neighbors less than receptive to the arrival of an African American family. But the Dillards did ﬁnd neighbors who welcomed them, including Father Marion Hammond at St. Thomas Episcopal Church, and their fellow congregants, Bea and Art Branscombe. For their part, the Branscombes were determined to create an inclusive Park Hill, in no small measure because of their own experiences. As Art Branscombe explained at the time of his wife’s death in 2002, Bea had ﬂed Austria after its annexation by Nazi Germany, and the trauma forever shaped her perspective. ‘When she got here,’ he recalled, ‘she said, ‘I’m not going to move again.’ For decades thereafter, the Branscombes remained active in the life and community of Park Hill, and came to serve as its unofﬁcial historians. 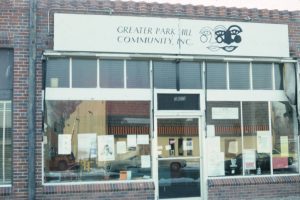 Park Hill Action Committee and its successor, Greater Park Hill Community, Incorporated, organized neighborhood events to foster awareness and address issues that threatened to divide the community throughout the 1960s and 70s. Conﬂict over the integration of Park Hill’s residential streets soon spilled over to the larger question of Denver’s segregated public schools. In the mid-1960s, the movement for school integration found a champion in Rachel Noel, a Park Hill resident, whose single term on the Denver School Board would see her put in motion events that would forever alter Denver’s public schools. Noel’s 1968 resolution, a call for a plan to integrate Denver’s schools, initially carried the School Board, only to lose support after a subsequent election. That reversal precipitated a lawsuit that eventually saw court-ordered integration. 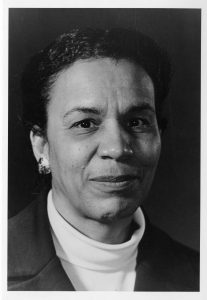 Rachel Noel and her husband, Edmond, a surgeon, moved to Denver in 1949 to the Park Hill neighborhood. Active in community and educational affairs while also raising two children, events soon called Rachel Noel to public ofﬁce and a central role in Denver’s history. In 1962, Noel and others learned that plans for a proposed junior high school at 32nd Avenue and Colorado Boulevard would ensure an almost exclusively African American student body. Similarly, boundaries for Bartlett Elementary School ensured it would serve an almost exclusively white neighborhood. As Noel recalled almost 30 years later, ‘That was clearly a matter of race.’ Her response was political action. Black and white voters elected her to the Denver School Board in 1965. She was the ﬁrst minority woman to serve on the School Board and served a single, six-year term.

After the 1968 assassination of Dr. Martin Luther King, Jr., Noel decided that the racial imbalance in Denver schools could no longer be tolerated. She introduced the ‘Noel Resolution’ which called for the school district to provide equal educational opportunity for all children. This resolution eventually resulted in court-enforced desegregation of the Denver Public Schools. In 1974, the Supreme Court ordered busing to integrate the schools.