Timeline of the Keyes Case 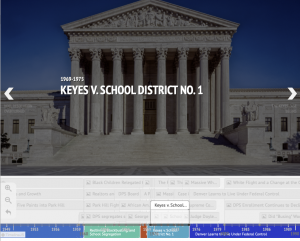 Happy New Year, neighbors! With 2020 now officially in the rear-view mirror, I am so thrilled to usher in what is hopefully a much better, safer, and more joyful new year.

This past year, for all of its heartaches and upheaval, had a few silver linings. For one, it brought about an increased awareness of the many injustices that face so many in our community. In particular, the onset of COVID-19 shined a bright light on the many inequities facing our schools. At Park Hill Neighbors for Equity in Education (PHNEE), we have considered how the pandemic may have brought about an opportunity to shed the “old normal” and build a new normal that moves closer to true equity for every student.

In order to design something better, however, we believe that we must understand the real story of how we got here. With that in mind, we are excited to share a new digital timeline, a historical chronology of the Keyes v. School District No.1 desegregation case that changed Denver Public Schools forever.

The timeline (which you can access at tinyurl.com/keyeshistory) was created by PHNEE member, Laura Lefkowits for the National Coalition on School Diversity. Lefkowits was a member of the Denver School Board in 1995 when the Keyes case came to an end, and she has spoken and written about the case extensively ever since.

Keyes was filed on June 19, 1969 on behalf of a number of Park Hill and other DPS students. It asserted that DPS had deliberately segregated Black children through boundary changes, new school construction, and overcrowding. The case wound its way through the courts and ultimately was decided by the US Supreme Court for the plaintiffs in June of 1973. As a result, DPS was required to implement a court-ordered desegregation plan that included transporting students from their neighborhood schools to other parts of the city. The order was terminated on Sept. 12, 1995 with the claim by the judge that DPS had “removed the vestiges of past discrimination to the extent practicable.”

I had a chance to sit down with Lefkowits and discuss her work and vested interest in this case. Below is what she shared with me.

Erin Pier: The Keyes case began in 1969. Why did you begin the timeline more than 100 years prior?

Laura Lefkowits: I thought it was important for readers to know that Black people were here as part of the pioneer movement and the founding of Denver. They established a rich history of activism that began long before the Keyes case. In fact, Black leaders successfully convinced Congress to deny Colorado statehood in 1867 because the proposed state constitution denied them the right to vote. Their settlement of Five Points as a culturally rich Black enclave created a place where they flourished as musicians, physicians, and business owners. As their numbers grew, they moved into Park Hill and brought their activist spirit and skills with them. Understanding the important role Black people played in creating the state, helps better understand their role in pushing Denver Public Schools towards equity.

EP: : What was the impetus for the case?

LL: In the 1950’s and 60’s, as the Black community began to grow, DPS did everything in its power to prevent Black children from going to school with whites. This included redrawing boundaries and keeping Black students in overcrowded schools filled with mobile classrooms on playgrounds. In response to protests, the DPS Board of Education passed several toothless resolutions declaring their commitment to equality but nothing really changed. Finally, in 1968, Rachel Noel, the board’s first African American member, put forward a resolution calling for an end to segregation and directing the superintendent to come up with a plan for desegregating the Park Hill schools. The Noel Resolution passed but the next year, opponents of the idea were elected to the Board. Their first act was to overturn the resolution. The lawsuit was filed in response.

EP: Why was Keyes such an important case in the national history of desegregation litigation?

LL: First, the case was the first one filed in a northern city where segregation was not enshrined in law as it was in the south. Even though there were no laws in Denver explicitly stating that schools had to be segregated, DPS was found to have caused segregation, and was responsible for correcting it. Second, the case was the first “triethnic” case because DPS enrolled Latinx students as well as African American. The courts found that a district could not desegregate Black students with Latinx students because both groups suffered similar inequities. Finally, the court determined that if one part of a district is segregated, the entire district is presumed to be segregated. For Denver, that meant that not only Park Hill schools were required to be desegregated but the entire district as well.

EP: You have researched and written about the Keyes case before. What new insights did you gain from doing a chronological accounting of the case?

LL: I was not familiar with the long history of social justice activism among Denver’s Black community. And, although I knew about Park Hill’s role in the case, I was so impressed to learn about the many people, even white neighbors, who worked hard to ensure that our neighborhood could be a national model for school and housing integration. Greater Park Hill Neighborhood, Inc. was founded during this time, initially called the Park Hill Action Committee.

On the other hand, I was deeply troubled to see the resistance to integration that came out in full force during the case. Massive white resistance to so-called “forced busing” was rampant across the country and Denver was no exception. The 1969 school board election in which anti-integrationists were elected was a very dark time in the district’s history in my view. Although the pro-integration slate won by 3 to 1 in Park Hill, it lost by 2 to 1 citywide. This led to the filing of the Keyes lawsuit as well as significant White Flight from the district into our southern suburbs.

EP: You were a member of the school board when the case was terminated in 1995. The Board at that time, limited by the anti-busing clause in the state constitution which was passed in response to the case and prohibits assigning students to schools for the purpose of achieving racial balance, made a number of policy decisions that are still with us today. Explain those.

LL: In response to overwhelming community demand from every racial and ethnic group, we assigned every student to a school close to their home; a neighborhood school. We attempted to maintain as much integration as possible by drawing neighborhood school boundaries to limit racial isolation and by allowing students who were in desegregated schools to remain there with free transportation. We also altered the way we funded schools to try to account for the increased needs of neighborhood schools with high concentrations of low-income and English language learners.

The biggest change we made was to allow any student to attend any school that had capacity as long as they could provide their own transportation. Remember that in 1995  the choice movement was only just beginning. The charter school law had passed in Colorado in 1992 and Denver had only a few charter schools. Denver accelerated choice with this policy change that, of course, is still on the books today.

EP: You include an epilogue in the timeline in which you express some regrets about these policies. Tell me about those.

LL: Because of the anti-busing amendment we were under pressure to get students out of schools where they were assigned for desegregation within one year. Looking back, and understanding that the district today is more segregated now than it was in 1968, I wonder if we, with more time, might have made different decisions. We had other options including implementing “controlled” school choice to provide socio-economic diversity in schools, or providing transportation to make choice more equitable, or even challenging the anti-busing clause as it pertained to some schools, particularly popular magnet schools. But we did none of these things, and as I write in the epilogue, I consider this both a personal and collective failure of governance.

EP: What do you hope readers of the timeline will gain?

LL: First, I hope readers will simply learn the history of the case and understand its importance to our neighborhood history and the history of DPS. I also hope that with the recent renewed interest in integration across the country — and I’m talking about true integration within schools, not just desegregation —  we might look at ways we could do this in as many DPS schools as possible, especially here in Park Hill.

We will be discussing the history of Keyes at our first EdEquity Corner of 2021 on Jan. 13 from 7 p.m. to 8:30 p.m. You can register at https://tinyurl.com/EdEquityJan21. For more information or to get involved with PHNEE, email info@phnee.org.

Erin Pier is a mother of three, Stedman parent, and school psychologist at AUL Denver. She is an active member of the Park Hill Neighbors For Equity In Education, which works toward diversity, equity, and inclusion in all schools in the neighborhood.