Imagine Being A School Without Boundaries

Home » Imagine Being A School Without Boundaries

Imagine Being A School Without Boundaries

Imagine a young family lives at 29th and Jasmine. During the school year, they often hear the sound of laughter emanating from the playground at Hallett Academy, the school just across the street. They picture their brand new baby as a big kindergartner, and think how nice it will be to walk her across the street on her first day of school. It’s a comfort to know she’ll be so close by. 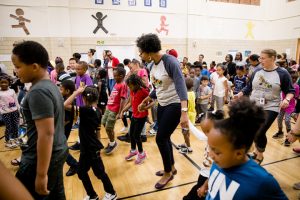 Imagine the family’s surprise, then, when they discover that the school they look at every single day isn’t actually where they are assigned. Instead, when their little girl is ready, unless they can navigate the school choice process, she’ll be headed for a different neighborhood school, several blocks away.

Why is this? Why would Hallett’s boundary not include a family who can hear the school bells ring from their kitchen? It’s because Hallett, a Park Hill neighborhood school since 1951, doesn’t have a boundary.

In a district where families can “choice in” to any school they’d like, so long as there is space and they can provide their own transportation, a boundary might not seem that important. After all, most charter schools don’t have boundaries, and some have families that are clamoring to get in.

But at a district-run school like Hallett, which doesn’t receive additional funding for unique programming or philanthropic investments to support recruitment, Principal Dominique Jefferson and her small team must focus endless amounts of energy on simply getting enough students to enroll.

In Denver Public Schools, each school’s operating budget – the funds they have available to hire teachers and staff, to provide programming and technology, to buy supplies – is based on how many students are enrolled at that school, a system called Student Based Budgeting.

Given that roughly half of DPS students attend the school they are assigned to, a principal can typically expect that her budget is at least partially covered by boundary enrollment. At Hallett, it’s up to Principal Jefferson to secure her entire budget by recruiting every student on her own, one student, one family at a time.

The history of Hallett

In the 1970s, magnet schools were developed across the nation as a form of voluntary school desegregation. The idea was that magnet schools would offer unique programming that would draw a diverse student body regardless of neighborhood, and thus lead to greater integration without relying on involuntary school assignment policies. Federal funding helped to sustain specialized programming and provide transportation to students who live further from the school.

Prior to the end of court-ordered busing in DPS, magnet schools were required to control their enrollment to ensure a racially diverse student body in exchange for these funds.

In the 1980s, Knight Fundamental Academy in south Denver became one of the first DPS magnet schools. The instructional focus of Knight’s magnet program was to prepare children for traditional formal schooling and instruction in basic facts and skills.

Ultimately, demographics changed in the surrounding neighborhood, and the school struggled to attract enough students to maintain racial diversity. Around the same time, DPS faced district-wide declining enrollment, and in 2007, determined that Hallett, along with seven other schools, would be closed. Two years later, in 2009, DPS moved Knight into the Hallett building, and it was reopened as Hallett Fundamental Academy.

During the time Hallett was closed, its boundary was redistributed between Smith and Stedman. As magnet schools traditionally don’t have boundaries, Hallett was not granted one when it then reopened in 2009.

Initially, Hallett was able to overcome this disadvantage, as Hallett Fundamental Academy had a strong leader in Charmaine Keeton, as well as several families who transitioned with the program from Knight to Hallett and thus provided an initial budgetary cushion.

During her tenure as leader, Principal Keeton held tight to a community of committed families, topping out her enrollment with over 400 students in 2014. Upon her retirement in 2015, however, new leadership took Hallett in a negative direction. The school’s culture changed, parents became less engaged, and ultimately, families fled. After two years of failure, Principal Jefferson, seeing a school community in need, applied for and was chosen to lead the school in 2017.

With 87 percent of the student population identifying as African American, Hallett has the largest population of black students of elementary age in the district. When Jefferson became the school’s leader, the Fundamental model, and its focus on teaching basic facts and skills, didn’t sit well with her. She petitioned the district to remove “fundamental” from the school’s name.

“I believe that students, especially students of color, are often underestimated, overlooked, and underserved,” Jefferson said. “There is a lot communicated in a name. To call something fundamental, to me, meant that it was easily understood because of how basic and rudimentary it was.

“Our students, all of them, are capable of so much more than basic things,” she continued. “They are far more complex beings, so I changed the name, removed the point of tension that ensued for me every time I said ‘Hallett Fundamental Academy.’ I communicated this change in name, by telling the community at large that I believed that their children were capable of so much more. I was certain they believed that too.”

Any funding that once accompanied Hallet’s magnet program dried up long before Mrs. Jefferson’s request for a name change. Aside from a small amount of funding from the district to transport approximately 30 students to the school, Hallett receives no other incentives for its magnet status. Yet it is expected to develop and sustain a budget similar to other neighborhood schools that have boundaries.

The cycle of inequity

Each student enrolled at a school brings with them between $4,200 and $8,000 in district funds, depending on their status as a special education student, English language learner, gifted and talented student, or having other special needs.

More students means more opportunities for field trips, specialized programming, even paraprofessionals or teachers of the arts. Such opportunities often bolster standardized testing scores, and can be alluring to future families and students, thus growing enrollment and leading to more funding. Conversely, when fewer students attend a school, there’s less money for programming and supports, and less money to spend on marketing, thus making recruitment even harder and leading to fewer students enrolled. And so, the cycle continues.

Without a boundary, Hallett is already a step behind the other Park Hill schools. Where certain funding is a given for others, the staff at Hallett must work tirelessly just to recruit and retain students, and thus, ensure a minimal operating budget.

Despite these odds, Mrs. Jefferson has led her staff and students to phenomenal and continuous growth, and has been able to meet her district enrollment projections. Imagine the success she could have if she could redirect the time, energy and funding spent on recruitment, simply because Hallett had a boundary.

Editor’s Note: For more on Hallett and the programs that Principal Jefferson has installed, check out Lynn Kalinauskas’s profile on the school that appeared last December.

Erin Pier is a mother of three, Stedman parent, and school psychologist at the Academy of Urban Learning, in Denver. She is an active member of PHNEE. For more information, check out the group’s Facebook page at facebook.com/phnee, or send an email to info@phnee.org.